3 Reasons to choose a “dot com” for your website, and 2 Reasons not to

One of the first steps for any business going online is of course to choose their domain name. That word or phrase that will forever be associated with your business, so much so that it is more central to the brand than the logo or anything else.

When choosing the domain name is a problem fraught activity, not least because of the way the rules have changed over the last few years. And I’m not only taking about the technical rules which have allowed a much wider variation of names to be possible, but also the expectations of customers and business partners as to what is reasonable and makes sense.

Although the internet started with “.com” as one of the few options that was possible, and so most companies have ended up with .com domains there are technically a huge number of variations available. 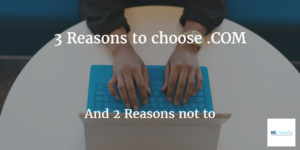 Some of those are geographically oriented and so “.hk” and “.asia” of course are well represented in Hong Kong, but there are also a wide range of topical top level domains available.

And the influx of new businesses to the internet has caused many companies to end up with domains that don’t make a lot of sense, because their first choices are already taken they end up with some questionable alternatives.

If your company is called Imagining Butler Merchandising, then you’ll find “IBM.COM” is taken and perhaps will be tempted to end up with “IBM.BIZ”, or “IBM.WS” (which supposedly stands for Web Site, though Western Samoa is what it was originally intended for) or even “IBM.COM.HK”.

So does it matter what your domain name ends with?

A – But, times are changing and just domain names themselves were invented to prevent people from having to see the technical details of IP addresses, so another layer of abstraction is appearing on mobile devices.
If you haven’t done so already take a close look at your web browser on an iPad, iPhone or Android device and you’ll notice that it doesn’t even show what the URL of the website is. Instead the name of the website is shown, and this subtle change may mean that the typical visitor to your website may not even notice what your address is. And even for email, that may not matter. As customer support moves to social media and instant messaging whether it is Facebook Messenger, WhatsApp or WeChat email is one a path to becoming irrelevant.
B – And as for the country domains, you can easily see that is as much an advantage as it is a disadvantage. If you are targeting consumers in Hong Kong then what says more that you are also in HK than to have a .hk website address? And although it may not be displayed by default any more as I just noted, if a business chooses to do so the “HK-ness” of their website can easily be promoted and emphasized whether it is on the side of a Green minibus on Conduit Road, on a billboard in Mongkok or the name cards you hand out.

So if your company name isn’t available as a “dot com”, don’t fret, seriously consider “.com.hk”, but just lets agree to stay away from the .biz.

And if you haven’t even decided on a company name for a new venture, then Google your ideas first before getting down to do the Business Registration because the internet is global, and the last thing you want is to be called “Amazon” and to try to get your name out there when you have a rather larger competitor for the name across the ocean!